Read our list of real estate company names for inspiration. 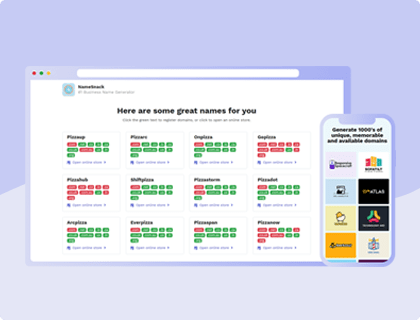 This name is short for Real Estate Maximums, as the company has a focus on franchising with agents receiving the maximum commission for each sale.

Keller Williams was founded by Gary Keller and Joe Williams, and the company is named after them.

The company is named after two of its partners: Colbert Coldwell and Benjamin Arthur Banker. The company was later sold but the name remained.

This name combines "real" from real estate with a suffix that indicates that the company has studied the real estate industry. It suggests that they are experts in the field.

The company was started by Sotheby's Auction House and named after its co-founder, John Sotheby.

Corcoran was founded by Barbara Corcoran, and the company was named after her. The business maintained the name after it was later bought.

The name Camden is a combination of the names of its founders: Richard J. Campo and D. Keith Oden.

While this name is a bit long, it also describes the focus of this company. The name suggests that the company seeks out homes with beautiful gardens, which appeals to clients with this as a priority for their home.

The word Zillow is a combination of "zillions" (referring to an extremely large number) and "pillow" to represent home. The name is intended to mean that many listings can be found on the site.

The founders of Century 21 initially wanted to name the company "20th Century Realty" to sound as though they had been in business for a long time. They realized that they would struggle to register that name, and came up with Century 21 instead.

How to Name a Real Estate Company

A 9-Step Process to Naming a Real Estate Company

Where can I find a real estate company name generator?

What are some good real estate company names?

What is a clever name for a real estate company?

What are some catchy real estate company names?

What are some real estate investment company names?

What are some good real estate business names?

What are some great realty business names?

10 appealing and memorable names for your housing cooperative.